Some Background on George

George would maintain a low menacing growl as soon as anyone entered the front room where he was crated.  He would lash out if you came near.

To make it safer for volunteers cleaning his cage and myself for cleaning and socialization, I replaced his whisk broom with the “George Broom” –  a  regular broom with 1/2 the handle cut off.  To ensure that I kept all my fingers, I attached a brush to the broken off portion of the broom handle (now known as the “George Brush”).  Many hours were invested in working with this “scaredy-cat” (We never use the often overused and bandied- about term “feral”). 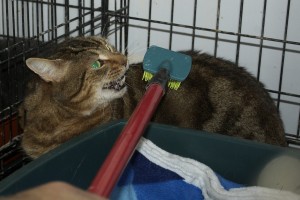 “Scaredy-cat George, at the beginning of his journey

On Thursday, June 12, George was put in another crate, in his new room and given time to acclimate to his new environment. On Friday morning, his crate door was left open. After gazing out the open door for about an hour, he finally ventured forward into his new life.
When I went to check on him a short time later, he looked up from his hiding spot with “A Little Help Here, Please!” expression. I blinked back, “It’ll only get better”.
Although unsure, he did let me scratch his head. You’ve come such a long way, my friend. 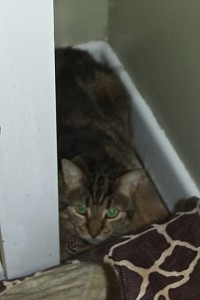 George looking a little unsure of himself

George was no longer in his initial “hidey- place” between the shelf and the wall. This morning, he was more relaxed and resting on one of the shelves. After a cautionary hiss, he allowed me to scratch him vigorously.  Brutus and Oliver seem to have accepted him into the fold. Hopefully, we’ll eventually have another teddybear. 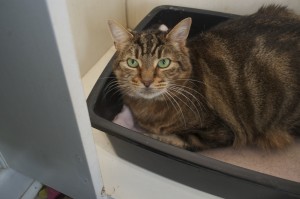 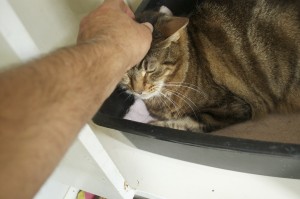 The beginnings of a teddybear?