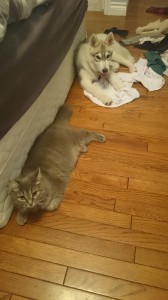 Hi Donna and everyone at NTCR!

I just wanted to give you a long over due update of our beautiful girl we adopted over a year ago, Mackenzie.

She is doing wonderfully and has changed so much from when we first got her! She was very nervous and shy when we first brought her home but I think that had more to do with our other furbaby Autumn being in the home. After a few weeks they both warmed up quite nicely to each other. Mackenzie quickly realized autumn was the leader of the animals and Mackenzie settled into her second in-line command

. She now loves being on our laps and loves to link and nibble her daddy’s arm.

About a year after we brought Mackenzie home Autumn started showing some difficulties breathing. After many vet visits and trying different methods to treat it, it was determined that his breathing was becoming an issue and nothing we gave him was helping. I made the very difficult decision one early morning after he began to open mouth pant to put him to rest and ease him from his very scary breathing problem. It’s been 3 months and my heart still aches. I could tell Mackenzie missed him too because she began waiting at the door for him and crying. When we put her dishes where his used to be she pawed them back to her spot. Amazing how in tune animals can be!

In a weird twist of fate we were given the opportunity to bring a puppy in to our home very shortly after Autumn’s passing. We welcomed jasper in to our lives and hoped mackenzie would approve. While they aren’t the best of friends, we often catch Mackenzie trying to love Jasper by giving him links and nudges. She definitely took over leader of the animals and shows jasper who’s boss. I think autumn would be so proud of his little sister. Our home feels complete again having the 4 of us and we can not wait to expand!

We are hoping to bring another feline friend into our home when jasper gets a little bit older. Of course your place will be our choice as we have been so happy with our Mackenzie.

We hope that you are keeping well!

Take care and all the best,