Smudge (Nickel) was 18 months old when he was adopted in April 2015 by Michelle and her family. Check out the update below to see how he has settled in and how he has created a bit of a name for himself. He’s becoming quite famous! Thanks to Michelle and her mom (Sandi – now one of our wonderful volunteers) for sharing his story.

“We’d always had cats and dogs when I was growing up and I had been considering adopting a cat for several years. Adopting a shelter cat seemed the most natural thing to do, as there are so many beautiful cats looking for loving homes.

My mom noticed Smudge’s bio on the NTCR fb page and announced ‘we have to adopt this cat’. Naturally, I wasted no time in completing the on-line adoption application and called Donna the very next day. We visited the shelter, we fell in love and two days later we brought him home. As they say, the rest is history! His name was Nickel, but we felt that Smudge was more appropriate given the cute grey markings across his nose. 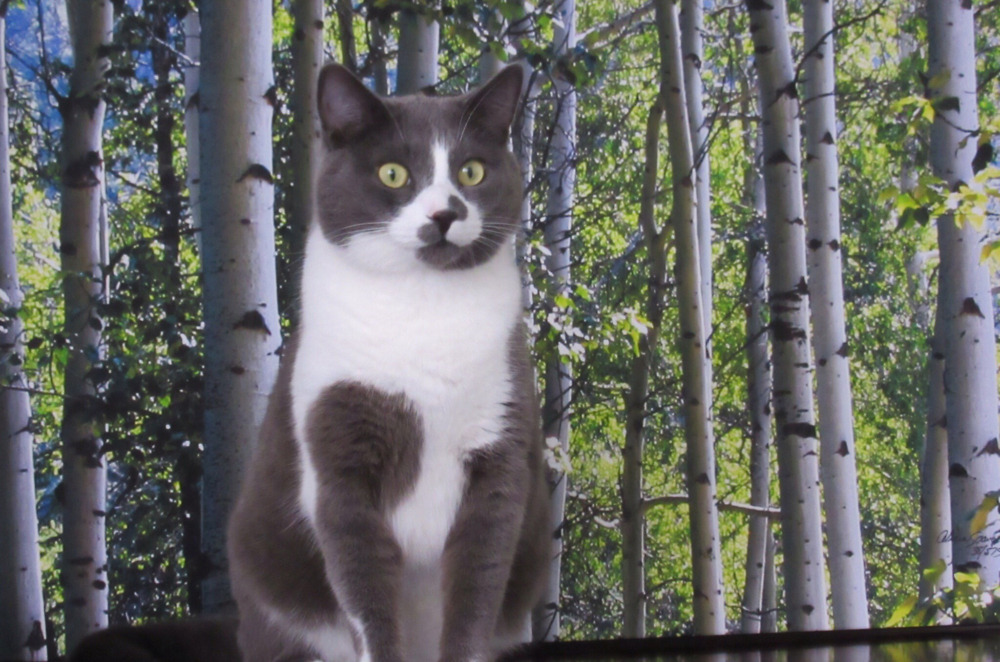 Once in our house, he settled very quickly, exploring every room and even claiming his favourite chair on day one. He slept in his cat bed for three nights and then decided that was enough of a settling in period and that it was time to move in to my bed!

His bio on the adoption page was so accurate. He is very affectionate and likes nothing more than curling up on my lap or very close to me. He follows me around the house and I’m not even allowed any privacy in the bathroom! Anybody who has a cat will truly understand that. He’s very vocal, especially at feeding time and he only goes quiet when the food is put in front of him. He’s a furry cutie and we think that he may have the biggest tail of any domestic short hair that we have ever seen! Check out the photo.

Whilst never a shy boy, he has become even more confident since he has lived with us. He actually believes that he owns the place and strolls around surveying his kingdom. It’s lucky that we don’t have any other animals in the house as they may just cramp his style! Whenever I come home from work he is always there to greet me and I love that ‘welcome home’ cuddle.

He has very clean toilet habits, but like many other cats delights in the ‘zoomies’ after using the litter box. He loves his ‘Greenies’ treats, but has little interest in catnip. He has recently discovered plastic straws and will entertain himself for hours playing with one. He’s very cute when he carries it around in his mouth and even takes it up to his bed with him. If you’re not paying attention he’ll steal the straw right from your soda can or drinking glass! He loves to play fetch and perhaps he thinks he’s a dog as he’s a little bit clumsy for a cat, but his antics keep us entertained for hours.

The pure love and joy of having Smudge in my life is so rewarding and he helps to make me smile and ease the stresses of a long day at work. I love him so much that it makes my heart hurt and I could not imagine life without him.

I created an Instagram account for him (@Smudgeee) just for fun but as his popularity grew, we decided to make him an advocate for NTCR and the many kitties that live there. As well as Smudge updates we also repost photos of NTCR adoptable cats and help to promote the ‪#‎adoptdontshop‬ philosophy. He currently has more than 14,000 followers, and in April 2016 was chosen by Toronto Life as one of “The 15 cutest Toronto Cats on Instagram”. Truly incredible.

We always knew he was a star, but to us he is just our little, loving Smudge!”