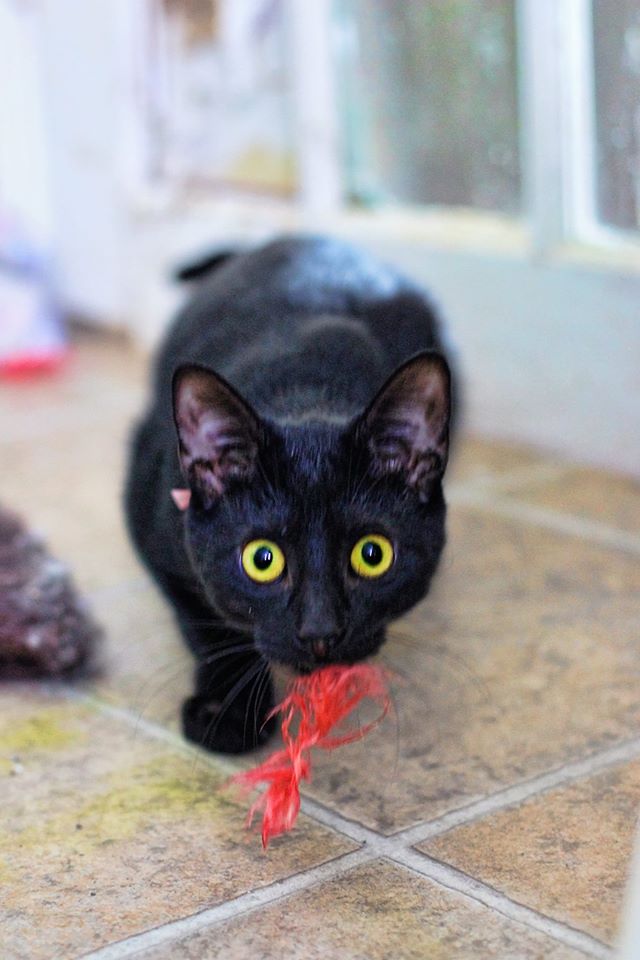 While fetch is a game most commonly associated with dogs, cats have also been known to enjoy playing fetch with their owners. The Siamese, for example, are felines famous for their love of fetch, but any kitty has the capacity to learn how to retrieve provided her owner is committed to teaching her the ABC’s of the game.

Whereas dogs may awaken from a deep sleep the second they hear their owners utter the magic word “play”, the same can’t be said for their more mellow meow-mates. To them, naptime is strictly that, naptime, thereby making it essential for committed coaches to catch their cats when they’re fully alert and feeling naturally energetic.

To capture and hold your own cat’s attention, choose a toy that she enjoys playing with, but isn’t always available. Test how catch-able it is by sliding it across the floor or tossing it down a hallway before you begin. Why? Because some toys are extremely light and aren’t fit for fetching.

Once you’ve chosen the ideal toy and your cat’s “all ears”, put some high-value treats in your hand and position yourself in such a way that you can toss the toy and she’ll have plenty of room to run after it. Then, show her the toy and toss it. While she may chase after it, she probably won’t return it to you on the first or even the second attempt.

Call her back by “flashing” her the treats as an incentive. If she drops the toy and comes running or if she has the toy in her mouth but won’t bring it back, you’ll have to, slowly and patiently, show her precisely what you want her to do. Walk over to the toy and pick it up from the floor or gently remove it from her mouth and return to your starting position.

Show her that you have the toy and call her to come to you. If she doesn’t respond, go over to her, lift her up and bring her back with you to the starting point. Then, once you, your cat, and the toy are all in the same place, toss the toy again. Repeat these steps again. And again. And again.

It may require several sessions before your cat puts the entire game together. Always use the same starting point and always toss the toy in the same direction. As with any new action or behavior, repetition and consistency are key. The first time she successfully fetches the toy, reward her with affection, praise, and some of those high-value treats. The idea is to have her associate her action with a reward she finds especially satisfying.

Cats are extremely intelligent, but they’re also extremely independent. Some of them may learn to play fetch in one session, others may learn over a period of several days, while still others may simply refuse to participate. Take training one step at a time, one day at a time, and if your kitty still turns paws down at playing what’s primarily a dog’s game, choose one that truly tickles her fickle feline fancy instead.