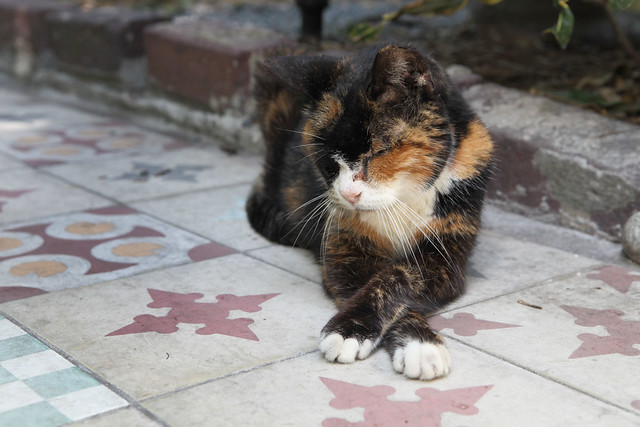 Cats with extra toes are called polydactyls, a name derived from two Greek words: “poly” meaning “many” and “daktylos” meaning “digits”. While the majority of cats have 18 toes, with five on both front paws and four on both back paws, it’s not unusual for a large number of cats to have extra toes — some with as many as eight on a single paw.

Some breeds are more likely than others to have polydactyly. Historically, 40 percent of Maine Coons have had extra toes, a most useful trait in the state of Maine that receives more than 100 inches of snow a year. The extra toes assist Maine Coons’ paws by acting like snowshoes, enabling them to pad about outdoors without falling through the snow as easily.

Prized by sailors throughout the world as being symbols of good luck, they were often called “gypsy cats”, while their extra toes made them excellent at catching mice and allowed them to maintain their balance on rough waters.

Some polydactyls are called “mitten cats” because they have extra toes on the medial or “thumb” side of their paws. While these toes usually aren’t fully formed and aren’t opposable like human thumbs, some cats have learned to use them in ways similar to the ways we use ours. Many cat owners have been astounded by the ability of their “mitten cats” to open latches or windows thanks to these extra digits.

The most famous polydactyls of all are the ones known as “Hemingway Cats”. In the 1930’s, sea captain, Stanley Dexter, gave an extra-toed kitten to writer, Ernest Hemingway. Since the kitten was a descendant of Dexter’s own polydactyl cat, Snowball, Hemingway named his kitty, Snow White. Charmed and fascinated by them, he collected more than 50 cats at his home in Key West, Florida, half of whom had extra toes. He cared deeply about his cats and named each one after a famous person.

Today, visitors to the Ernest Hemingway Home and Museum can view the colony of between 40 and 50 cats, some of whom are directly descended from Snow White. Half of them still have extra toes. They receive regular veterinary care, including vaccinations and treatments for fleas and other pests, and staying true to the tradition of the writer himself, they are all still named after famous people.